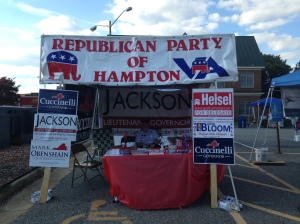 Ken Cuccinelli, E.W. Jackson and Mark Obenshain visited Hampton, Virginia on Saturday in an effort to rally more support for the upcoming November election. Candidates met with voters and spent time with supporters during Hampton’s 31st annual Bay Days celebration. Republican support in Hampton has long been a political struggle. In the 2012 presidential election the city of Hampton overwhelmingly voted for Barack Obama by 72%.