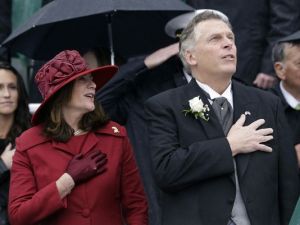 The former Democratic National Committee chairman emphasized the need for bipartisanship in leading the state government.

“Common ground doesn’t move towards us, we move towards it,” McAuliffe said during his inauguration speech, according to the Associated Press.

The next four years will be a tumultuous blend of economic policy and political stalemate in the state legislature. McAuliffe made a brief pitch for expanding Medicaid across the state, a hard sell for the GOP-controlled House.

“Like the majority of other states, we need to act on the consensus of the business community and health care industry to accept funding that will expand health care coverage, save rural hospitals, and spur job creation,” the governor said.

As one of his first orders of business, McAuliffe signed an executive order setting a $100 cap on gifts to executive branch members and their families, including himself and his wife and children. The order also establishes an Executive Branch Ethics Committee. This comes as a response to the scandal that plagued former governor Bob McDonnell’s final year on office. McDonnell and his family accepted thousands of dollars from Jonnie Williams, former CEO of dietary supplement maker Star Scientific, Inc. McAuliffe will ask lawmakers to “enact the strongest possible new ethics rules to hold all Virginia elected officials to the highest of standards.”