The Recount is Official 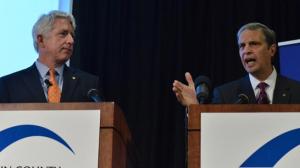 It’s been a month since Election Day in Virginia and the recount date of the attorney general’s race has been officially set for December 16th and 17th. Richmond Circuit Court Judge Beverly W. Snukals granted the first day as an early start for Fairfax County, due to the size of the county and set up of its voting system. The rest of the state will begin the process the following day.

Republican Mark Obenshain lost the race to Democrat Mark Herring by 163 votes, making it one of the closest races in the state’s history. Obenshain originally requested that the recount be closer to Christmas but the judge did not want it to interfere with the holiday. Recounts usually take between two to three days. Now, it should be able to wrap up by Dec. 20th.

There are still many flaws in the voting system and Obenshain’s attorneys have requested that all secured poll books be unsealed in order to prevent any distortion. Herring’s team disputes the request out of concern for security if the documents are left open.

In an article published by NBC 12, Herring’s attorney, Kevin J. Hamilton, said, “Right now, the poll books are in a vault, inaccessible to the public. Poll books are also not relevant in a recount, only votes count.”

Both sides are also arguing about the use of cell phones and cameras and whether or not they should be allowed into the booth with the voter. There are technicalities that need to be ironed out before the recount and hopefully it will be as fair as possible.